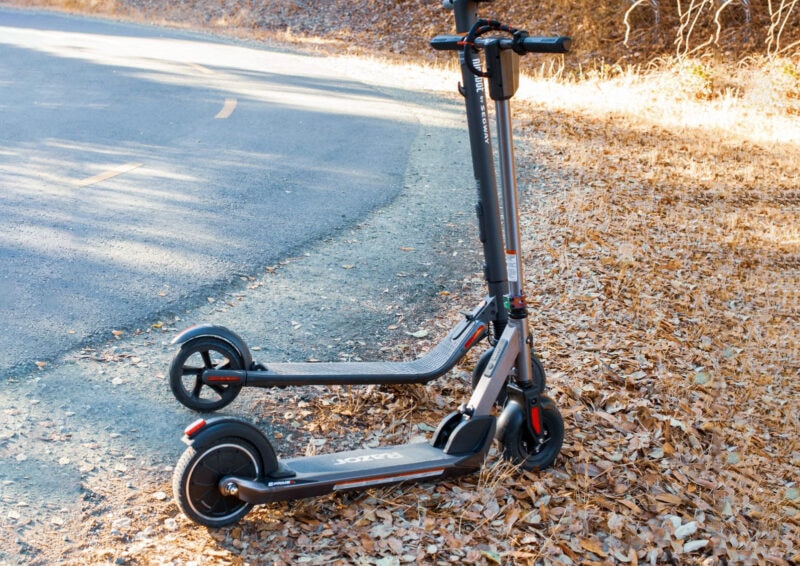 Electric scooters offer commuters a new and budget-friendly way to get around the city. Electric scooters can vary in range and speed, with factors like these affecting their total cost. When buying an electric scooter, you should take into account how far you have to travel and how quickly you want to get there. Other factors like build quality, safety, and portability should also be considered. In this article, we will be reviewing the Razor E Prime III.

The Razor E Prime III has a 250W motor that promises to reach a top speed of 18 MPH. While not one of the fastest scooters in the world, this does theoretically outperform Razor’s predecessors, such as the E Prime Air, which can only reach a speed of 15 MPH. If you’re riding around in a city, then 18 MPH is plenty fast enough for most realistic commutes. This thing can’t really handle off-roading anyway, so the speed is comfortable enough for urban riding.

The acceleration on the E Prime III is nothing to write home about, as its 250W motor doesn’t offer the most responsive take-off. The motor does claim to be a high-torque rear hub-driven brushless electric scooter motor, but for its low wattage, you won’t get the punchy acceleration that you can find in other electric scooters. All in all, the acceleration can be described as medium-low, which isn’t awful for scooters in this price range.

The Razor E Prime III is not the best at tackling inclines, but it still chugs along at a decent pace if the hill isn’t too steep. Of course, heavier riders may find these inclines to be more difficult.

Razor is notorious for being somewhat vague with their battery ranges, often giving an amount of time rather than distance in their descriptions. They do offer a distance range on the E Prime III, however, with a range of 15 miles per charge. This is made possible by the Razor E Prime’s 36V 5200mAh lithium-ion battery.

Although they promise a range of 15 miles per charge, many riders have found that the actual range is closer to 10 miles in realistic driving conditions, which is disappointing. Unless you have a perfectly flat commute, which most people do not, then you should expect to get less than 15 miles per charge.

The battery takes 8 hours to charge initially, and 6 hours to charge each time after the first one. A charge time of 6 hours isn’t bad because you can easily reach a full charge while at work, but you would expect it to be shorter considering the low range and battery capacity (187.2Wh) of the scooter. The Turboant X7 can get a full charge in as little as 3 hours, and it has a better range at just a slightly higher price

One thing to note about the battery is that the top speed drops off significantly as the charge starts to deplete. This happens because the overall battery voltage drops, and it will likely be an annoyance for some riders. If you’re traveling on hills your battery will also start to deplete quickly. This is definitely a drawback to this scooter.

The Razor E Prime III cannot handle potholes and other large bumps very well, but road deviations of under an inch or so aren’t too bad to ride over. This is mainly because the E Prime III doesn’t have any spring suspension systems built into it. The only suspension in the E Prime can be found in its front pneumatic e-scooter tire. Pneumatic simply means that the tire is filled with air as opposed to being solid rubber or honeycomb in design.

The back tire of the E Prime III is solid rubber. An electric scooter with similar specs is FluidFreeRide’s CITYRIDER, which also has no spring suspension system.

The CITYRIDER only has two honeycomb wheels for its suspension, but it has a similar top speed and range as the Razor E Prime III. The CITYRIDER also has a 300W motor for more acceleration. Plus, it’s about the same price as the Razor E Prime III, so it may be a better choice for people on a tight budget who want an electric scooter of decent quality.

One of the advantages of having a lower speed and range than other scooters is that the Razor E Prime III is very light and portable. Weighing in at only 24.2lbs, the E Prime III is only slightly heavier than its extremely lightweight predecessor, the E Prime Air. With this weight, you can easily tote the E Prime III around with one hand. You should easily be able to carry it upstairs and for long distances without feeling fatigued.

The E Prime III also folds up rather nicely, making it very compact when it is completely folded. You can easily bring this scooter on a subway or bus. It has a quick-folding mechanism that bends where the stem meets the deck to make it as compact as possible. The fact that this is an extremely lightweight and compact electric scooter is one of its major benefits.

This Razor scooter has a pretty nice build quality. The frame is made with aircraft-grade aluminum alloy with an anodized finish, making it both lightweight and durable. The deck is only 5.5 inches wide, which is on the narrow side as far as electric scooters go. Still, this could be considered as an advantage as it adds to its portability.

There is no LCD display on the Razor E Prime III, but there are a series of lights towards the bottom of the stem that indicate how much battery power remains. The headlight for this electric scooter is mounted high up, near the handlebars, which is a nice feature as many scooters mount their headlights closer to the wheel, where visibility is limited.

There are two options for braking with the Razor E Prime III. The first is near the throttle and is activated with the thumb, slowly braking the e-scooter through its motor. The second brake is on the rear wheel and is pressed down with the back foot, which seems to be a feature that Razor will never abandon. Since this thing can’t reach that fast of a speed anyway, this dual braking system seems sufficient enough to provide a safe ride.

The Razor E Prime III only comes with a 90-day warranty. This is kind of a letdown as most other electric scooter companies will offer at least a 6-month warranty. Many companies even offer a 12-month warranty, so hopefully, you will discover any manufacturer errors before this 3-month period is up. You also have to pay for shipping, which will add up to your total cost.

Who Should Buy the Razor E Prime III?

The Razor E Prime III is a step up for Razor’s line of electric scooters, but there are still many issues that have to be fixed before it can compete with other scooters in this price range. For this reason, we have to give the E Prime III 3 out of 5 stars.

The build quality and safety on the E Prime III is solid, but the poor suspension and poor battery hinder this scooter’s capabilities. We recommend this scooter for first time buyers who don’t have to travel very far on their commute. With its uncertain and limited range, this electric scooter may be best for kids who just need it for fun and not actual commuting.