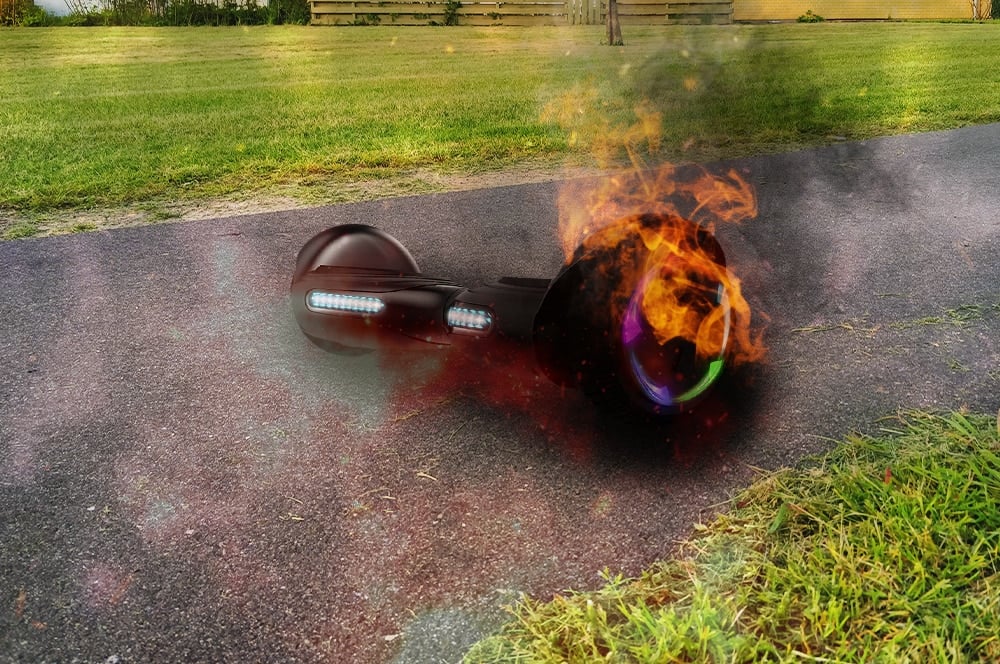 Are hoverboards safe to ride in 2020? We give you all the info on recalls and fires you need in this article.

Hoverboards were officially created in 2013 and sold quickly to people eager to hit the roads and ride fast. The exact inventor remains controversial (both China and the United States are involved), while the invention itself also has its fair share of problems. Hoverboard safety issues revealed themselves almost immediately after the toys came out, prompting retailers like Amazon to pull them from the market.

Hoverboard recalls became commonplace in 2016 and 2017. So, are hoverboards safe? Has the hoverboard combusting problem been solved? In this article, we’ll go through a timeline of recalls, reasons why hoverboards have gotten significantly safer, and how to avoid hoverboard fire hazards on your own.

Here’s a list of recalled hoverboards found on the CPSC website. The United States Consumer Product Safety Commission is an independent agency and is responsible for making sure consumer products are safe. You’ll notice that there haven’t been any more hoverboard recalls since November 2017.

This is significant considering authorities put out a huge recall on hoverboards in 2016: half a million boards made the list. We’ll discuss the shift in the next section.

All Self-Balancing Scooter Recalls Since 2016 (Newest to oldest)

According to CPSC’s list of hoverboard recalls, there hasn’t been a recall in 2018, 2019 or 2020. Why? We can thank Underwriters Laboratories, or UL, an independent safety testing company. They created a series of tests for hoverboards and other self-balancing scooters a few years back.

For a while, no hoverboard met these UL 2272 requirements, but in early 2016, they approved a hoverboard produced by Ninebot, Segway’s parent company. You’ll notice that lots of hoverboards were recalled after that, so even though the new safety standard was set up, most brands were not meeting them. That’s changed, luckily, and you can find many brands with the UL stamp of approval.

What Does UL Test For?

What does the UL test for? Here’s a rundown of their tests designed to separate hoverboard brands that catch fire from the ones that don’t:

Nearly all hoverboards use lithium-ion batteries because they are small, but store a lot of power. Unfortunately, they are also prone to overheating and explosions. To find out if that’s a possibility with specific hoverboards, UL has tests that stimulate a battery cell heating up and what happens if a battery gets punctured. If they explode, that’s bad news. A self-balancing scooter fire can destroy an entire house.

Hoverboards use USB chargers, and they are not always safe. Before a hoverboard gets a UL certification, the lab tests the charger. Using a charger that is not UL-certified is a bad idea. A bad charger could cause perfect batteries to get overcharged, and then they explode. They might also just pop without much fanfare, dry out, and die. Neither are good. Knock-off chargers are common, so it’s best to use the charger that you got with your UL-certified hoverboard because you know it’s been tested.

If you’re on the lookout for a new and safety certified hoverboard charger, we’ve got you covered with this article.

When building a hoverboard, it’s very important that the manufacturing process is top-notch. To save money, some brands aren’t very careful. UL opens up hoverboards they’re testing and takes a closer look. In ones that didn’t pass their tests, the wires were crimped and exposed, which could easily cause a short-circuit. Some were not secured properly, so when riding, they could actually come loose.

While looking inside hoverboards, UL might also notice shortcuts that could cause big problems. According to Quartz, UL has found metal shavings inside, which could cause short-circuiting and wires tears. To test for good construction, UL conducts drop tests. If the board breaks and parts come loose after just one drop, it’s probably not going to get that coveted UL 2272 stamp.

UL has many other tests for hoverboards, like a leakage current test, shock test, crash test, mold stress relief test, water exposure test, thermal cycling test, motor overload test, and vibration test. If you want to get even deeper into everything they’re looking at, check out this page on their website for a full list of tests.

Even if a model has gotten a UL 2272 certification, there could still be hoverboard safety issues. Things can change once you’ve been riding a board for a while, and improper care can make a hoverboard dangerous. However, the UL 2272 certification is the best defense against hoverboard fires, so you should absolutely only consider brands that meet that standard. You can find lots on Amazon now, as well as other retailers. Brands wear the distinction with pride, so if you don’t see it clearly displayed on the board or product page, odds are it probably isn’t safe enough.

How to Protect your Hoverboard against Fire Risks

Even perfectly-designed hoverboards with a UL 2272 certification could cause a fire or other problem. While there hasn’t been an official hoverboard recall since 2017, you’ll still see stories of scooters exploding or starting fires. Why? The first reason could be that the hoverboards weren’t UL certified. The other might be that the owners weren’t taking proper of their board. Here’s what to do to avoid literally playing with fire:

1. Don’t buy a really cheap hoverboard or one that isn’t UL-certified

This is a no-brainer. With hoverboards, you get what you pay for. While you don’t have to spend $1000+ on a top hoverboard, it is riskier to get one that’s under $300 or so.  You should certainly never buy one that isn’t UL 2272 certified. If you wanna go cheap, check our list of safe cheap hoverboard instead.

You’ll frequently see stories of hoverboards exploding overnight or after their owners have left them charging for hours at a time. Most hoverboards take just 3 hours at the most to charge fully, and then they should be unplugged. This isn’t just to save energy; leaving a hoverboard charging too long can overcharge the battery. As we mentioned before, even perfectly-good batteries can explode or die when overcharged, so don’t do it. You should also not leave your hoverboard charging unattended.

3. Don’t leave a fully-charged hoverboard lying around for very long

If your hoverboard is fully-charged, you shouldn’t leave it stored for too long. We recommend taking it for a short ride, so it gets down to at least 90%. Leaving a fully-juiced hoverboard in your garage or house for weeks at a time isn’t a great idea. It’s almost like the batteries' energy is bursting at the seams.

4. Keep your hoverboard in a cool area

Hoverboard batteries are sensitive to heat. If they get too hot, they can explode. Pretty much all batteries are like this, but lithium-ions are much more unstable. Make sure you aren’t leaving your hoverboard in a room you know gets really hot or hit with direct sunlight for hours at a time. Find a place that’s relatively cool and away from flammable objects. Ideally, you don’t expect your hoverboard to explode, but if it does, you want to make sure it won’t start a fire that spreads.

5. Play nice with your board

UL does conduct drop tests for hoverboards, but eventually, all hoverboards will break if you smash them around. Keep your board protected by not taking too many risks and not going off-road unless you have an all-terrain hoverboard specifically designed for the task. You should try not to crash just for your own safety, as well, so hopefully bashing up your hoverboard is not something you intended to do.

Hoverboards that have been UL 2272 certified

In the market for a hoverboard that meets all the essential safety requirements? There are lots of brands and models out there, such as:

Now that hoverboards manufacturers have mostly figured out how to make safe products, the biggest safety concern is injuries. Most people aren’t getting burned; they’re just falling off their hoverboards. To stay as safe as possible, always wear the appropriate gear. At minimum, you should protect your head. Get a good helmet designed for cyclists, since these have their own set of safety standards.

You want to make sure it is fitted properly. Other recommended gear includes knee pads, elbow pads, and wrist guards. Falling on your tailbone can be incredibly painful, too, especially if you’re going at high speeds, so consider padded shorts specifically designed for skateboarders, snowboarders, and now, hoverboarders.

If you’re going to get a hoverboard for kids, we recommend getting the above-mentioned safety gear as well.

It’s always important to have the fundamentals on point as well. Make sure you learn how to ride a hoverboard properly before you take upon any type of terrain challenge.

Hoverboard recalls appear to have been clustered between 2016-2017. Now, most big brands are springing for the UL 2272 certification, a relatively new set of safety requirements that significantly lowers the risk of hoverboard fires.

If you want a hoverboard, be sure to get one that has that official UL stamp. You can also avoid hoverboard fire hazards by taking good care of the board. Don’t let it charge longer than necessary, or let it sit fully charged for too long. Store it in a cool area away from anything that might catch on fire, and treat the hoverboard well when you’re riding. Smashing it up can hurt the batteries and motor.

If you are still wary of hoverboards because of early horror stories, you can rest easy. The safety requirements have significantly improved in a very short time, so if you get a UL-certified hoverboard, things will probably be just fine.

10 Electric Scooter Accessories Every Rider Must Own