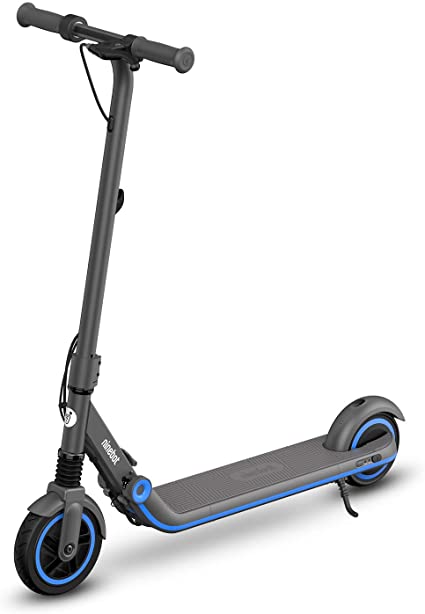 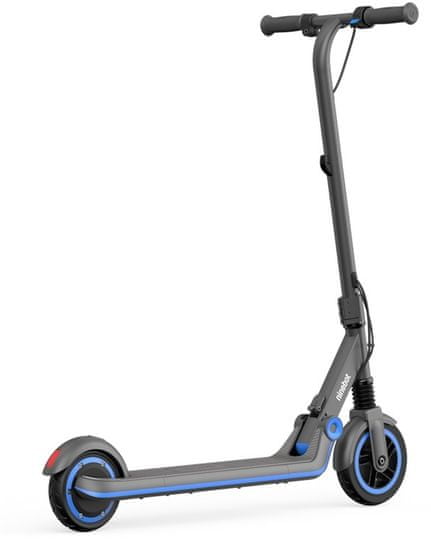 If you read our review of the ZING E8, you’ll have a pretty good idea of what to expect from the Segway Ninebot ZING E10. Whereas the E8 was designed for younger children between the ages of 6 and 12, the E10 is suited for the 8 to 14 crowd.

Although there isn’t a whole lot of differences between the two models, there’s a difference in which age group each is intended for. Choosing the right electric scooter for your child doesn’t have to be challenging.

To help make things as easy for you as possible, we’re taking a detailed look at the Segway Ninebot ZING E10 and why it may or may not be a good fit for your youngster.

One of the first things you’ll notice about this scooter is its ability to reach a higher top speed. The E8 could only hit 6.2 MPH (8.7 MPH with Turbo Mode). This time around, you’re getting a noticeably faster unit that is capable of going 10 MPH.

It might not sound like a big difference on paper. But in execution, 10 MPH is just the right top speed for novice youths who are not yet comfortable with fast electric scooters.

While the Segway Ninebot ZING E10 comes equipped with the same riding modes, there are now LED lights accompanying each mode to let you know how fast you can go. This feature also injects some much-needed character into the electric scooter.

Safe Mode is still here and delivers the same maximum speed of 6.2 MPH. It’s nothing to write home about but is good for beginners who are still finding their footing. Once they become acclimated with Safe Mode, they can switch over to Cruise Mode and increase their top speed to 10 MPH.

Turbo Mode works exactly the same as it does on the E8, where you press the throttle to increase the speed to 10 MPH. This works well and does a fine job of giving you an extra acceleration boost when you need it. Turbo Mode is also handy when trying to climb steeper inclines.

However, just as with the E8, hills can pose a bit of a challenge to this scooter. As such, you’re better off avoiding them and sticking to level surfaces as much as possible. The reason why inclines are an issue for the E10 is because of the limited motor power.

It’s still only 200W, making it quite underpowered when compared to the best electric scooters. To give you an idea of what the competition comes with, let’s compare some different scooters.

Again, 10 MPH isn’t bad all things considered. But any child who is comfortable with electric scooters will likely scoff at the E10’s top speed. That said, there’s no denying that it’s safer. If you don’t want to turn your child loose with greater speeds, the ZING E10 is sure to satisfy your concerns.

Ninebot ZING E10 is powered by a 21.6V 2550 mAh (55.08Wh) lithium-ion battery with Smart Battery System Management - the very same battery found on the lesser ZING E8. As such, you can expect to get around 40 minutes of ride time on a single charge, or 6.2 miles.

Steeper inclines will require more power from the ZING E10 and result in less ride time the longer you travel on hills. As long as your youngster stays on level surfaces, they shouldn’t have anything to worry about.

When the battery is depleted and needs to be recharged, you’ll have to give it 4 hours to complete. Considering the fact that this battery is relatively small, you would expect it to recharge in a bit less time. It’s still faster than most other electric scooters, but they have much larger batteries, too.

Here’s where the Ninebot ZING E10 shines. Regardless of what kind of surface you’re on, this baby is able to provide a comfortable ride. This is all thanks to the E10’s spring shock suspension system and high elastic rubber tires.

The two combine to make bumps less noticeable and riding more manageable. Whether on sand, concrete, dirt, or grass, the ZING E10 is capable of holding its own. As with its younger sibling, the E10 delivers a smooth riding experience every time.

The handy folding feature makes the Ninebot ZING E10 perfect for portability and travel. At just a fuzz over 18 pounds, it’s incredibly lightweight and easy to handle. I like that it fits into a trunk without issue, as it takes up very little space.

Youths between 8 and 14 shouldn’t have any trouble managing this e-scooter. It’s a breeze to maneuver and its lightweight body helps make it exceedingly convenient.

Electric Scooters for youths should be some of the best-built units available in terms of safety. As a parent, you want your child to have a fun time on their electric scooter, but you also want them to be safe.

You will be happy to know that the Segway Ninebot ZING E10 is a solid unit that is built to last. Its construction feels secure and its performance is sound. It’s important to note that this electric scooter is designed to hold children no heavier than 110 pounds. If you risk exceeding this, you’re asking for trouble and performance will inevitably drop.

As I mentioned previously, the E10 comes with LED lights that go a long way in making this electric scooter safer than its E8 counterpart. With its triple-braking system (electronic front brake, footbrake and regenerative motor brake), your child will be able to stop with authority.

We always recommend you talk about safety with your kid before getting them their electric scooter. Here are a handful of important safety tips that’ll help them stay safe. With many injuries affecting the head, buying an electric scooter helmet is also a must.

The Ninebot ZING E10 comes with a 1-year, 180-day, and 90-day warranty, depending on what part needs servicing. The electric scooter’s deck, front and rear assemblies, stem, handlebar, charge port, and bottom cover all fall under the 1-year warranty.

Components such as the battery pack and charger, throttle, and brake fall under the 180-day warranty. Finally, components that are capable of experiencing normal wear and tear, such as the handlebar grips, LED strip, kickstand, charge-port cover, and things of that nature are covered for 90 days.

I appreciate that Segway-Ninebot provides such a comprehensive warranty. Sure, the coverage varies across all of the different components. But at least it’s a lot better than what some of the other entry-level scooter brands out there offer.

Who Should Buy the Ninebot ZING E10?

Kids who are just getting their feet wet with electric scooters make good candidates for the Ninebot ZING E10. Thanks to its age range of 8 to 14, teens who have never used electric scooters will want to give this one a look.

The E10 is slightly larger than the E8, so judge your child’s size and choose accordingly. Just remember that this scooter can’t support weights greater than 110 pounds. It is very well-made and solid in its construction, however.

I rate the Ninebot ZING E10 a 3.5 out of 5. It’s not the fastest unit out there, but it’s very affordable and makes a great entry-level scooter for youths who are not yet accustomed to riding them. Once they’ve gotten a taste of higher speeds, though, they’re likely to want something with more power.