The Razor Hovertrax 2.0 is one of the most popular hoverboards sold on the market at the moment. Razor, launched in 2000, is known as the worldwide leader in scooters. With more than 34 million scooters sold, Razor is a reputable brand that knows what they’re doing.

Introducing the Razor Hovertrax 2.0 model… The #1 best selling hoverboard by the brand. (And one of the most popular options in the world).

We’ve decided to put this budget-friendly hoverboard to the test and see if it lives up to the hype that surrounds it.

At first glance, this hoverboard looks sleek. It’s fairly basic in its appearance, but it’s also evident that the product is designed with both safety and practicality in mind.

The hoverboard features a steel frame with a shatter-resistant polymer body. This ensures a lightweight and sturdy finished product. Also, the body is equipped with fender bumper protection which will help keep your board safe against inevitable bumps and scratches. Oh, how I wish my first hoverboard had this…

Another notable feature is the two LED lights seen on the front of the Hovertrax 2.0. It’ll ensure that you or your kids are visible in a low-light setting. It’s actually also becoming commonplace for states to require these lights if you are to drive around in public after dark. 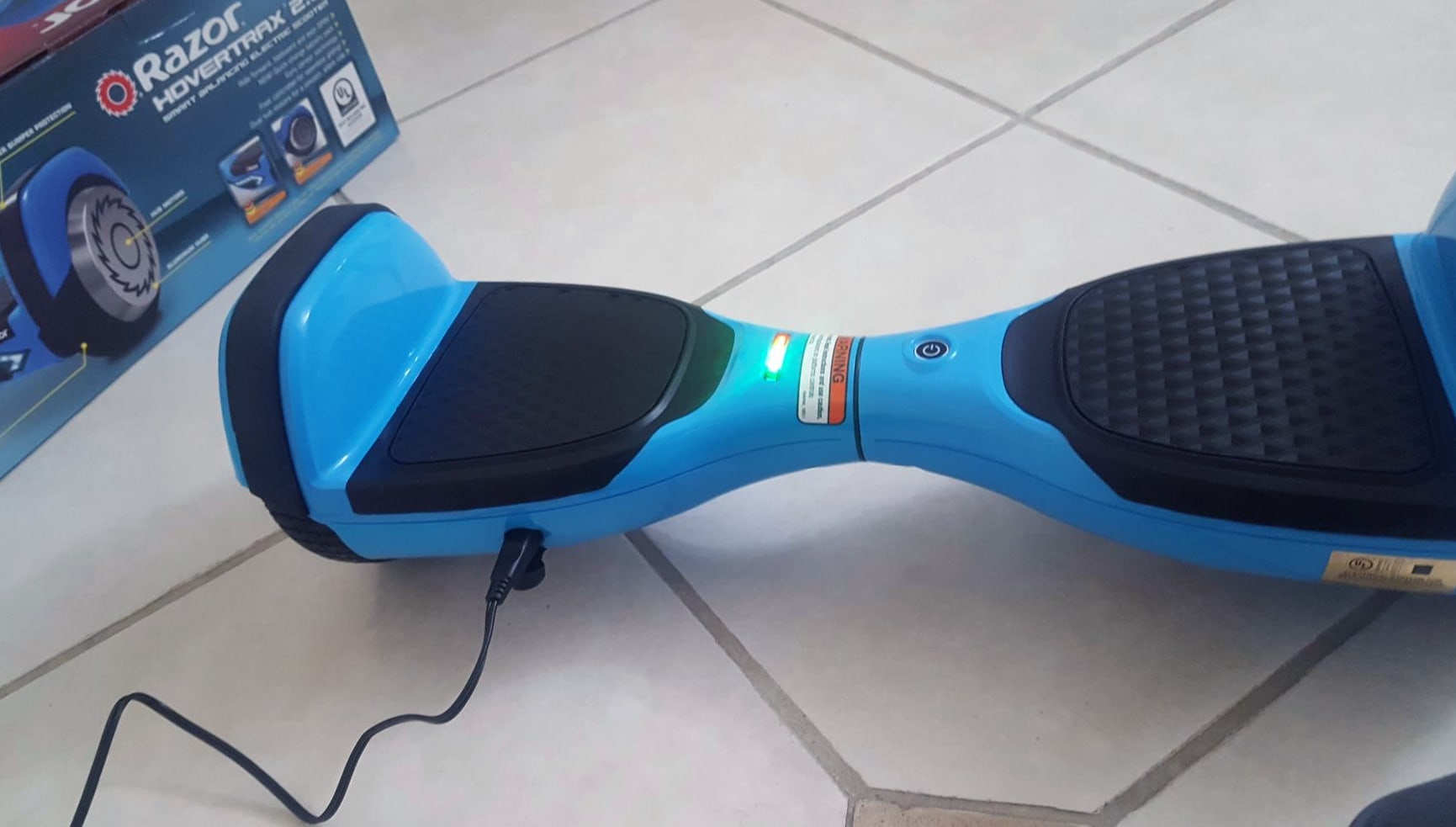 All the horror stories with hoverboards catching fire and exploding are pretty much behind us now. We have the UL-2272 certification to thank for that.

Specifically designed to regulate the hoverboard-industry, this certificate poses lots of safety requirements to manufacturers. In order for a product to achieve the UL-2272 safety rating, it has to pass a rigorous amount of safety and stress tests. Therefore, only buy UL-2272 certified hoverboards.

Razor was the first company in the US to receive the certificate and that’s because they follow strict safety guidelines. This is something their brand has been well known for throughout its lifespan of almost twenty years!

The Hovertrax 2.0 is no exception to these exceptional safety standards – it has, of course, received the UL-2272 certificate, meaning it’s 100% safe to ride.

This feature-packed hoverboard impresses with its user-friendliness and intuitive design. The Razor Hovertrax 2.0 has two different riding modes that you can switch between seamlessly.

There’s a riding mode for beginners called “training” and a regular riding mode called “normal”. The training mode will put a cap on the speed that the hoverboard can reach, giving you a safe environment for learning how to ride a hoverboard properly. Trust me when I say this… You do not want to start out at full power on a 500W hoverboard if it’s your first time “hovering”.

Once you get the hang of it, you can switch to the normal mode, unlocking the full power potential of the Razor Hovertrax 2.0.

If you’re expecting to be flying at the speed of light, you may be disappointed…

The Hovertrax 2.0 features silent dual motors that make up a total of 135 watts of riding power. At peak power, the output is 350 watts.

135 watts isn’t all that much compared to some of the best hoverboards around. However, considering its incredibly low price and it mainly being intended for kids and teens, this is actually very decent. At the end of the day, we’re interested in what the max speed is of the Hovertrax 2.0 and not wattage numbers.

The official max speed of the Hovertrax 2.0 is 8 mph. This fits quite accurately with our own tests. We managed to go 7.8 mph so considering factors such as weight, inclines and the ground type you’re riding on, this is pretty precise.

Exclusive to Razor hoverboards, the Hovertrax features EverBalance™ technology. The hoverboard auto-levels, making it both easier and safer to mount it. Also, this auto-self-balancing gyro-sensor technology ensures an even and ultra-smooth ride. This hoverboard definitely felt great to ride – even compared to some of the more expensive units.

The Razor Hovertrax 2.0 boasts of having about 60 minutes of riding fun in one full charge. This equates to around 8 miles per charge. We were able to get 7 miles out of a single charge, but then again, I’m an adult and this hoverboard is officially recommended for kids 8 years and above.

The hoverboard houses a 36-Volt lithium-ion LG battery pack which is UL2271 certified itself. This hoverboard is safe as houses, so you won’t have to worry about any complications with poor battery quality or anything similar.

One awesome feature of the battery is the way it is installed. You can purchase a replacement battery and super quickly switch it around, thus get more riding time in a single go. For most hoverboards, changing the batteries is a headache, but Razor made it easy with this one. Thanks, Razor!

Another safety feature makes its mark. The non-slip rubber footpads. This is a really important feature and I personally think every hoverboard should have this. It is essential for rider safety as it helps you immensely having a safe grip on the board.

Amazing Value For Your Money

The most impressive point of all is the amount of sheer value you get for your money here. Most hoverboards within this price range offer either less power, less range or come from an unrecognized brand you should probably stay away from.

You’re getting a very ideal package, well balanced for both adults and kids alike. It is worth noting that the maximum load weight is 220 lbs (or 100 kg) but this is sufficient for most adults.

While it isn’t the fastest hoverboard around, you’ll still be able to speeds high enough to get thoroughly entertained. Remember, you can always upgrade to a more expensive and powerful hoverboard in the future if you end up liking it a lot. The Razor Hovertrax 2.0 is a solid place to start.

Our verdict: We give the Razor Hovertrax 2.0 a total of 4.2 out of 5 stars. It offers immense value at a low price point and it’s solidly built, ensuring the safety of the rider.

In case you’re looking for the Razor Hovertrax 2.0 manuals, please refer to the “Downloads” area on this page. On there, you’ll find the Owners Manual, a guide to replacing the battery packs, and a hoverboard calibration manual.