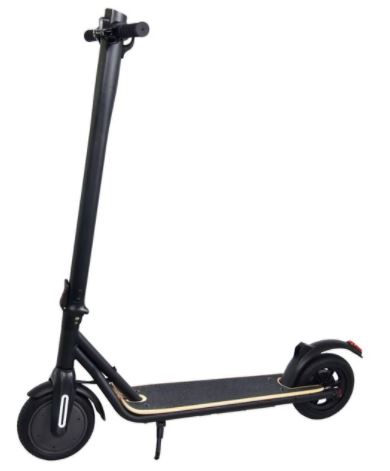 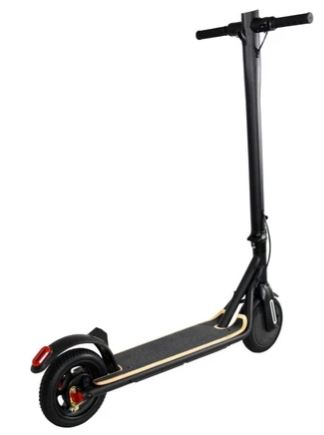 Many cities weren’t designed to handle the amount of traffic they currently have. New York City, for example, was designed before the invention of cars, and civil engineers certainly didn’t account for the fact that countless vehicles would one day rule the streets. To make your commute bearable, you may want to consider purchasing an electric scooter.

Not all scooters are made equal. Depending on the price, some scooters are going to have different battery range and top speeds. If you have a relatively short commute, then FluidFreeRide CITYRIDER scooter may be the best option for you.

At an affordable price, the FluidFreeRide CITYRIDER is a great entry-level scooter that boasts a sleek and elegant design. Although it has its flaws (more on that later), the CITYRIDER is an overall decent quality scooter that is great for commutes of 10 miles or less. Continue reading to find out more information on this scooter and whether or not it’s the right choice for you.

To start things off, let’s examine the CITYRIDER’s speed and acceleration specs. The FluidFreeRide CITYRIDER is packing a 300W motor, which allows it to reach speeds of 18 miles per hour.

This might not be the break-neck speed that some enthusiasts are looking for, but it’s reasonable within city limits and fast enough in denser traffic to feel like you’re moving at a decent pace. A similar scooter would be the Gotrax Xr Ultra, which has similar speed specs but doesn’t have any of the fancy, on-board electronics.

The acceleration is fairly quick on level ground, and you can get to the top speed of 18 MPH in a short amount of time. If you are on an incline, you may notice that the CITYRIDER is somewhat slow to accelerate, especially if the battery isn’t fully charged. If you use your foot to give the scooter a kick-start then you will surely be able to make up for this lack of acceleration on inclines.

The battery on the FluidFreeRide CITYRIDER is a lithium-ion at 36V 7.5Ah. Although not the most powerful battery in the world, the scooter itself is only 28 pounds so it doesn’t require substantial power to get it moving. This battery should be able to get a range of 10 miles per charge. This might not be as much as other scooters in the same price range, such as the Turboant X7 Pro (which provides a range of 30 miles per charge), but the CITYRIDER is smaller and more compact so this is to be expected.

The range here is one of the few limits of this scooter but is perfect for commuters rather than those who want to travel long distances. One of the advantages of a smaller battery is a shorter charging time to reach full charge, however. Since it is a pretty portable scooter, you can easily bring it into your office and charge it at work so that it’s fully juiced up for the ride home.

Unfortunately for the FluidFreeRide CITYRIDER, the suspension on this scooter is one of its major drawbacks. There are no springs on this scooter, so the rider may notice that the ride is pretty bumpy. On paved city roads, this might not be felt as much, but outside of city limits, you are definitely going to be feeling a bumpy ride.

To compensate for the lack of suspension, the CITYRIDER does have honeycomb wheels. Honeycomb wheels are solid, rubber wheels that are designed to have air pockets within the wheels to absorb some of the shocks from the road. However, it should be noted that the honeycomb wheels only make a slight difference, and they cannot fully make up for the scooter’s lack of a spring-based suspension system.

An interesting feature this scooter has is cruise control. This is a handy feature but can be somewhat cumbersome if riding on a decline. You may want to coast as the decline begins, but if you aren’t paying attention, then your scooter may break or accelerate unnaturally to match its cruise control speed. Luckily, you can easily disable the cruise control by either tapping the throttle or the brakes, so this really isn’t much of an issue.

One neat feature this scooter has is Bluetooth compatibility. If you install the CITYRIDER’s companion app, you can access and change some of the scooter’s specs. For example, you can set top speeds which is incredibly useful if you are a parent buying for a kid. Another scooter that can do this is the Xiaomi M365, which is cheaper than the CITYRIDER but also doesn’t have as powerful a motor.

The companion app also allows you to set the speed for cruise control. This can be useful if you want the scooter to run at a consistent speed so that you know how much battery power you’re using. You can also engage the cruise control through the app, as well as change your speedometer units from miles to kilometers.

The CITYRIDER weighs in at 28.5 pounds. While light enough to carry short distances, this could make your arms tired if you’re carrying it around all day. The scooter is also pretty compact, at a height of 47 inches when unfolded and a length of 43 inches when it is folded.

It is important to note that the CITYRIDER folds at the stem and not at the deck. This somewhat decreases its portability as it cannot lay completely flat, but it isn’t so much an issue that renders it immovable. The stem hinge is great for stability and it feels secure when it is folded.

The build quality on this scooter is relatively decent, but it does have its flaws. One of the pros of this scooter’s design is that it has a sleek and elegant look to it. The deck is wooden which gives it a retro kind of feel.

In terms of stability, the frame of the scooter is made with robust steel that doesn’t rattle when you ride it. The CITYRIDER feels sturdy – and it is – while riding and makes you confident that this thing is built to last. It has a simple design, but that only adds to the sturdiness of the scooter as there aren’t a lot of places for things to go wrong.

The CITYRIDER also has LED lighting in the front and back. This provides a good measure of safety as the headlights are bright enough to get around during the dark. The backlights are also a great signal to other motorists so they are very likely to see you in traffic.

One thing to note is that because the suspension of this scooter is virtually non-existent, the constant vibrating may cause the electric wiring to fray over time. The occasional use of electric tape should be able to fix this problem, however, and it’s really only a minor drawback.

FluidFreeRide’s website offers a list of warranty protection for your scooter. If the FluidFreeRide CITYRIDER arrives in any condition other than described, you can get a full refund. A full refund is also available to any buyer as long as the package remains unopened.

If the scooter experiences issues within 180 days due to a manufacturing error (e.g. Faulty battery), then they will provide you with the parts or repairs necessary to fix it at any of their locations. FluidFreeRide does note that their support team will work with you to find a solution in any circumstances, even if it is not covered by warranty. So, it feels like they really do care about helping their customer base resolve any issues.

Who Should Buy the FluidFreeRide CITYRIDER?

Overall, the FluidFreeRide CITYRIDER is ranked with 4 out of 5 stars. It has a decent range and speed for its price and comes with a cool set of electronic features like LED lighting and Bluetooth compatibility. It’s a solid pick but it doesn’t quite match the top electric scooters on the market.

As the name implies, this scooter is great for people trying to commute in a dense city. If you have a longer commute, you may want to consider something with a farther range. The FluidFreeRide CITYRIDER is also a great choice for kids, as it has a relatively low top-speed that can even be modified with the Bluetooth app for parental control.

The FluidFreeRide CITYRIDER is a great entry-level scooter for those who are just trying to get around more quickly than walking. If you're after a little more power and range, you may want to check out our review of the FluidFreeRide Horizon.